The 2018 Peace Forum focused on countries that did not participate in the Treaty on the Prohibition of Nuclear Weapons or the Ban Treaty.

Over 120 students from 9 schools participated. 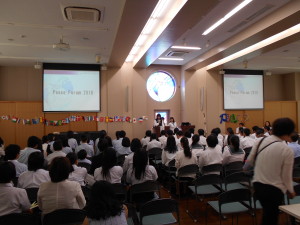 This year’s forum had two guest speakers; Dr. Hirofumi Tosaki, a Senior Research Fellow at the Center for the Promotion of Disarmament and Non-Proliferation, the Japan Institute of International Affairs. Wakana Mukai, formerly a special assistant professor at Tokyo University, and now a lecturer at Asia University. She specializes in Disarmament and Non-Proliferation.

Drs. Tosaki and Mukai presented an overview of the Treaty and difficulties involved in countries signing it. Their explanations gave students some clear ideas they could use in their discussions.

In the afternoon, students were divided into 7 groups. Each group represented a country that students had researched. In each room, students made presentations about their country and how people could influence their governments to sign the treaty. Students were given two and a half hours to present, discuss and come to a consensus about their countries. Although this time was short, many groups came up with some interesting proposals.

The main aim of the Peace Forum is for students to think about what they, as high school students, can do to work for a nuclear free world. Although this forum only had 120 students attending from Japan and America, the students learned about the challenges we face in working toward a nuclear free world, and hopefully, they learned that working together they can change the world.